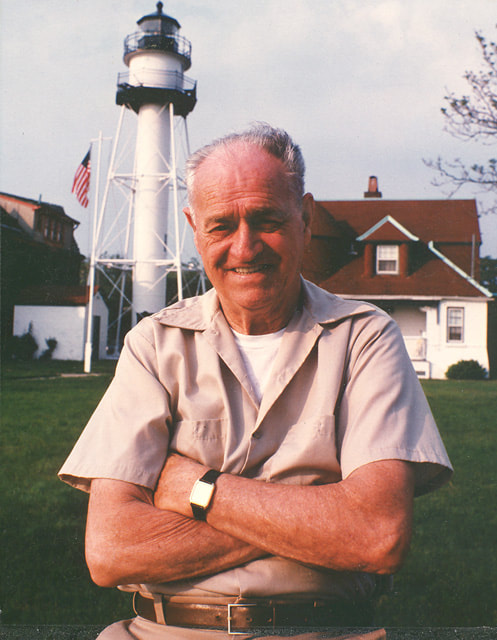 Born in 1915, Frank grew up in Staten Island, New York, during the Great Depression. Jobs were scarce so Frank ended up working as a lifeguard for the WPA, the Works Progress Administration. Learning swimming and life-saving skills, he put them to good use after High School when he got a job with the U.S. Lighthouse Service aboard a buoy tender ship named the Tulip. The work was tough and dangerous, but Frank did what he had to do to make ends meet.

In 1938 a great hurricane hit New England and the Tulip got caught in the storm, as it sailed through New London, Connecticut. The ship was lifted up by the ocean, high enough that it was actually put down on land, upon the New London railroad tracks. It was finally removed after several days and the crew went back to work. The following year, the Lighthouse Service merged with the Coast Guard and civilians were no longer allowed to work aboard the tender ships. Frank was given a job as a lighthouse keeper on Old Orchard Light.

Old Orchard was a small lighthouse just to the southeast of Staten Island, just a small lighthouse on a little island with nothing else there. Frank served on Old Orchard with two other keepers. The men would work for 21 days and then be off for 6. By the time the men got close to their shore leave, they were ready to kill each other. No visitors were allowed, and you would go out once or twice a week for supplies. Since you had a lot of free time, you would catch a lot of fish and lobster (each man had 3 traps) on the island. The keepers ate so much lobster they got sick of looking at it.

After two and a half years, Frank was transferred to Governor's Island - this was much better because Governor's Island had its own little community. It was home to the U.S. First Army, and it had a number of accommodations for the residents of the island including a bowling alley, a movie theater, a barbershop, and other typical things you might find in a small town. Frank used to maintain the two lights of Governor's Island, one at the southern end of the island next to a small shack (which is still there) and another light atop Castle Williams. Because the island was home to military prisoners, sometimes when Frank needed assistance with a task, he would be given a prisoner as a "helper".

Frank's time on Governor's Island was temporarily interrupted by his being drafted into World War II. After passing the physical, he was sent to the Coast Guard, but didn't want to join the Coast Guard because he wanted to get away from boats. He was sent to the Navy, which he rejected for the same reason. He ended up wanting to go into the Army, and the recruiters were all grinning at him for some reason - he didn't figure it out until later - the Army had the most boats in World War II out of anyone.

After basic training, he went to Camp Gordon Johnson in Florida and became a boat operator and instructor. He was given the task of taking the new soldiers out and teaching them how to operate landing crafts and small boats. After about a year, he was sent to Brownsville, Texas but soon after the school was shut down because they didn't need anymore boat operators. He was sent to a another Army unit in San Francisco, where he did boat operations for another year. Eventually he was transfered to the war front in the Pacific with the 3001st Combat Engineers. When the war ended, Frank returned to the United States on the USS Admiral W. L. Capps and returned to his job on Governor's Island.

​The Schubert family loved living at the Coney Island Lighthouse - it was Frank and his wife Marie, as well as their three children - Francine, Thomas, and Kenneth. They enjoyed living there, giving tours to schoolchildren and girl scout troops, swimming, fishing, playing on the lawn, and having a wonderful time. And through the years the children grew up and got married and had children of their own.

In May of 1986, Marie passed away. Around the same time, the Coast Guard was working to automate many of their lights, causing the lighthouse keepers to become unnecessary. Many articles were written and television pieces aired talking about the lonely lighthouse keepers being a dying breed. However, in Frank's case he had so much positive press attributed to him through the years that he was safe. Every news article that would come out in the years following would talk about how he was going to be replaced by machinery or put out to pasture because he was a man of a different era.

But he never retired.

No, the old salt would continue living at the Coney Island Lighthouse, mowing the lawn, painting and fixing the house, taking care of the light and the grounds, working until he was 88 years old. Even when the light was partially automated in the 1989 he was still needed to take care of the place, and keep watch over the waters of Coney Island.

Sadly, in 2003, at the age of 88 Frank passed away in his sleep. But he will always be remembered as an icon of Brooklyn - keeping the light shining and watching over Coney Island for 43 years.